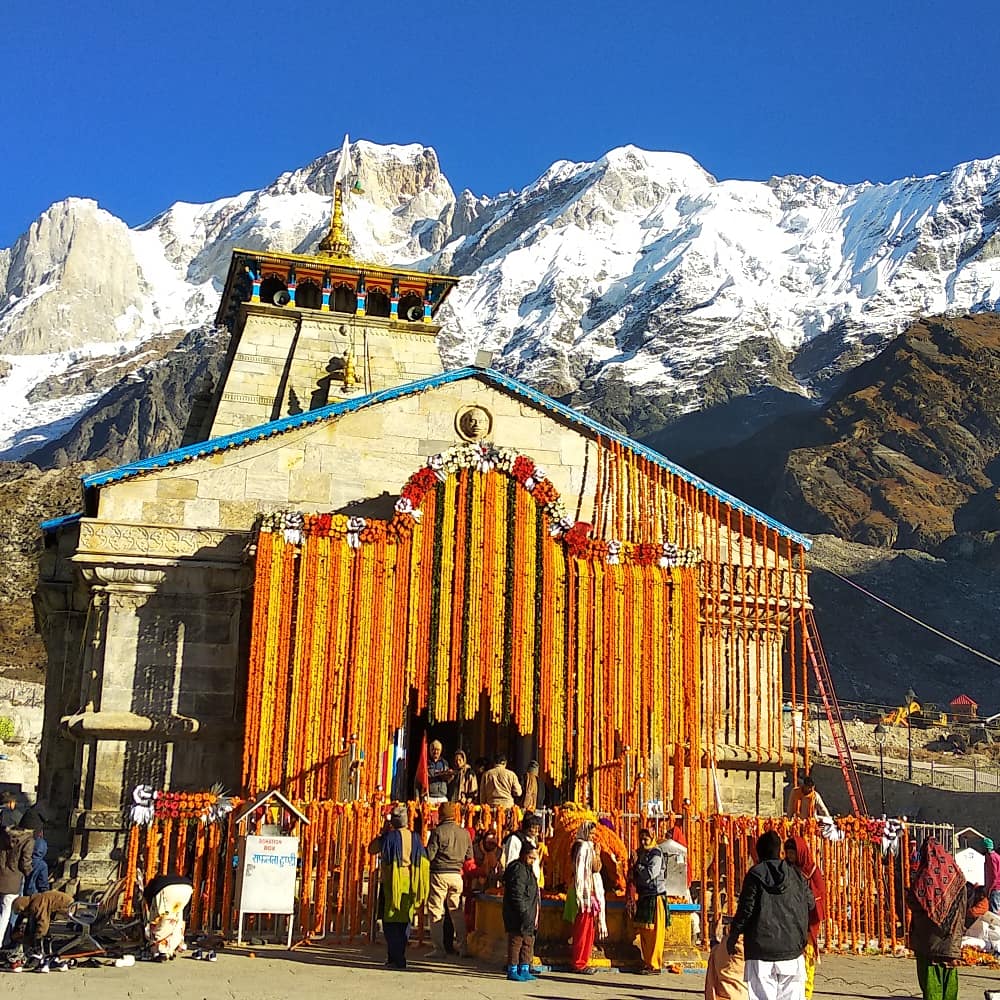 The doors (kapat) of the Kedarnath Temple (Mandir) open to devotees every year in the month of April-May and close around the last week of November. This is the best time to visit Kedarnath Dham. And during the Char Dham Yatra season, you can also visit Badrinath Temple, Gangotri Temple, and Yamunotri Temple. The weather and climate during the yatra season are very pleasant and the temperature remains below 20 degrees Celcius.

The inauguration of the Kedarnath temple is announced by priests on the day of Basant Panchami.present year in 2022, the Kedarnath mandir will be opened around 6 May 2022.

The temple remains shut down for six months every year during the winter session. Its deity is brought to the Onkareshwar Temple in Ukhimath, where its worship continues for the next six months of winter.

The doors of the Kedarnath temple are open to pilgrims for a period of six months.
The kapaat opening of this holy Hindu temple opens at the end of April or early May.
Hence the best time to visit the Kedarnath Temple is between April and November with April to mid-June and October to mid-November is the being the most ideal time.

Weather in Kedarnath remains mostly cold. The summer season begins in Kedarnath in the month of April. It is that time of the year when snow melts and the roads are cleared for pilgrimage by the end of April with the help of the Army. The average temperature of Kedarnath during summer from about 2 ℃ to 19℃. Only April-May and mid-June are the perfect time for a pleasantly quiet and sightseeing in the summer months. This time is the best time to visit Kedarnath Mandir.

The monsoon season begins in Kedarnath in the middle of June and ends in the middle of September. The monsoon brings heavy rains in Kedarnath, as well as landslides. so traveling during the monsoon becomes less than ideal. And the temperature also remains around 12 ° C. After 2013, this area is considered to be a flood-prone area. Hence the temple is closed even during the monsoon. This is not an ideal time to visit Kedarnath Yatra 2022.

The Kapat of the Kedarnath Temple remains closed in the winter season, sometime after Diwali. Kedarnath receives heavy snowfall during the winter months from November to March. Due to which the city is covered with snow. And due to which all the routes are blocked. Due to snowfall, the temperature of this place reaches sub-zero. Therefore in the winter season, the kapats (doors) are closed for six months and the deity of Kedarnath is brought to the Omkareshwar temple in Ukhimath. And here they continue to be worshiped for six months.

May to June and September to October are the best time for travelers to visit Kedarnath and Badrinath. The climate of the Kedarnath valley remains soothing and cold during this period. The temperature in Kedarnath falls to zero in the winter season. And there is heavy rainfall during the monsoon season.