Char Dham Yatra is honored as one of the most sacred pilgrimages in the world. These Four virtuous temples are situated peacefully in the lap of mighty Himalayan peaks. And nothing spells devotion more than a visit to the Char Dham Yatra 2022. Therefore, Ganga, Yamuna, Vishnu, and the mighty Shiva reside in their purest incarnations up there. Char Dham Yatra 2022 comprises four temples. And the name of these temples is Yamunotri, Gangotri, Badrinath, and Kedarnath. And for a Hindu, it is the closest one can come to experiencing heavenly bliss.

Char Dham, literally meaning is ‘the four abodes. So this yatra refers to the journey up the mountains of Garhwal Himalayas to four sacred temples. These Temples are situated in the North Indian state of Uttarakhand. And it is also referred to as ‘Chhota Char Dham’ to disassemble it from the bigger circuit of Char Dham Yatra.

Yamunotri Dham, named after the Goddess Yamuna is the first Dham route the yatra.
A bath in the holy river Yamuna is said to cleanse one of all sins and protect from premature death.

Ganga River starts from Gangotri Glacier near Gangotri. And Gangotri Dham is the second temple that comes on the Chota Char Dham circuit. Gangotri Temple is the origin and birthplace of the holy river Ganga.

Kedarnath Dham is known as the land of Lord Shiva. This Jyotirlinga is located at an astonishing height in Northern Himalayas. Kedarnath Temple is situated on the coast of the Mandakini River. The view of this temple against its snowy backdrop is magnificent.

Badri is another name of Lord Vishnu. And Badrinath Dham, named after Lord Badri (Vishnu). Badrinath Temple is situated along the banks of the Alaknanda River. It is also a part of the bigger Char Dham circuit, it stands beautifully on Garhwal Hill. Its golden head flicker and flaunts its red flag with godly presence Lord Vishnu and Lord Shiva. They are two of the three most revered deities in Hinduism. Worshiping these two Gods is considered very high and important in Hinduism.

Importance of Badrinath And Kedarnath

Badrinath and Kedarnath are the two sanctums holding great importance in Hindu dharma. And these are dedicated to Lord Vishnu and Lord Shiva respectively.

As per Hindu mythology, these two pilgrimages are compulsory to visit once in a life. Because to seek forgiveness for their sins. Thus swarms of devotees gathered here every year.

The major destination points on the trip are Haridwar, Uttarkashi, Rishikesh, Guptkasi, Rudraprayag, and Gaurikund in Kedarnath. Then Badrinath in Chamoli, Joshimath, and Devprayag.

Delhi to Haridwar for Ganga bath.

Then Haridwar to Uttarkashi to visit Gangotri and Yamunotri Temples.

After that Kedarnath to Badrinath. And Finally, Badrinath to Rishikesh or Haridwar.

This sacred tour starts with a dip in the holy Ganga river in Haridwar. After that Haridwar to Uttarkashi to visit Gangotri and Yamunotri Temple. Furthermore, to Reach Kedarnath Temple, It is 19 km of a trek to Kedarnath from Sonpryag. And then finally, the last destination Badrinath Temple.

It is beautiful to drive to Badrinath where tourists can enjoy and admire mother nature as well. The whole tour takes the tourists to a unique amalgam of spirituality, holiness, and unparalleled beauty of nature. So, the question is where and how do you start on your Char Dham Yatra? The Answer is here, so read till the end.

The journey of Char Dham Yatra 2022 starts on the providential day of Akshay Tritiya of Chaitra month and remains open until Bhai Dooj.

This sacred yatra will take you 11 to 12 days. There are a lot of other diversions such as Gaumukh, Tapovan, Along the valley, Bhauravnath Temple, Vasuki Tal, Chopta, Auli, and Hemkund Sahib.

You can choose packages from Tours and Travel Services to start your yatra. Because they provide services from Delhi, Haridwar, Rishikesh, or Dehradun, according to your facilitation.

Delhi, being the capital, is connected to all the major cities. It is also just a 4-hour train ride away from Haridwar.

Char Dham Yatra starts with a visit to Yamunotri Dham after a 36 km drive from Barkot, then followed by a 7 km trek. In addition, Barkot connects to Uttarkashi which is just about 100 km from the Gangotri Dham.

After Yamunotri and Gangotri Dham darshan, You can visit Kedarnath Dham.

Kedarnath can be reached from Rudraprayag. Rudraprayag is about 180 km from Uttarkashi, followed by a 21 km trek up the mountain of Garhwal Himalayas.

Rudraprayag is also just 160 km away from Badrinath Dham. And this is the final destination of your sacred yatra.

From Badrinath, there are a number of routes that will lead you back to Delhi by Haridwar.

If you are not able to visit all four dams in your itinerary, then Badrinath and Kedarnath Dhams are the most-essential ones. Because they are termed as one of the best spiritual tours (yatra) among Hindus. Chota Char Dham Yatra of Uttarakhand includes the shrine of Yamunotri, Gangotri, Badrinath, and Kedarnath. All the shrines are nestled in the Garhwal Himalayas.

Yamunotri and Gangotri are the sites of Goddess Shakti, while Kedarnath and Badrinath belong to Lord Shiva and Lord Vishnu respectively. 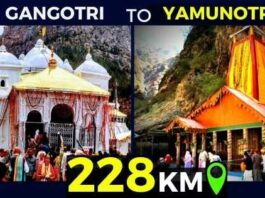 How To Reach Yamunotri From Gangotri: Route Map & Distance (228Km) 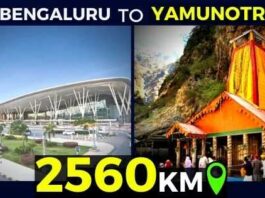 How to Reach Yamunotri from Bengaluru: Route Map & Distance (2560km) 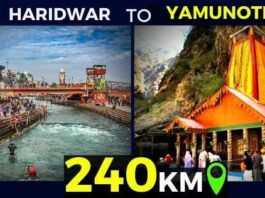 How To Reach Yamunotri From Haridwar: Route Map & Distance (240km) 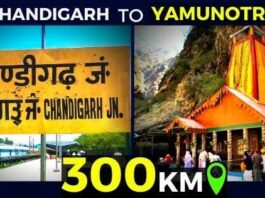 How To Reach Yamunotri From Chandigarh: Route & Distance (300km) 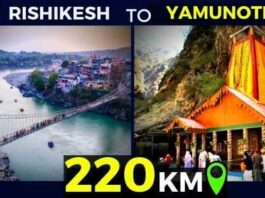 How To Reach Yamunotri From Rishikesh: Route Map & Distance (220km) 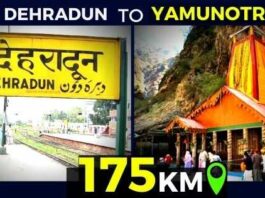 How To Reach Yamunotri From Dehradun: Route Map & Distance (175km)