Home Kedarnath Yatra Facts About Kedarnath: 17 Thing That Will Blow Your Mind 😲 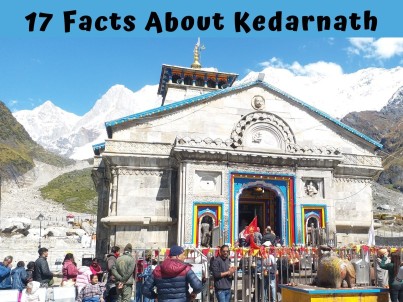 1. The Shiva Lingam of the Kedarnath temple is a triangle shape. and hence is unique among Shiva temples. which is placed in the sanctum sanctorum (Garbha Griha) of the temple. The Kedarnath temple houses idols of Parvati, Lord Krishna, five Pandavas and their wife Draupadi, Nandi, Veerabhadra and other gods and goddesses along with the vehicle Nandi of Lord Shiva.

2. When the Kedarnath temple is closed for six months in the winter, the idol of the deity is brought to the Omkareshwar temple of Ukhimath and worshiped in that temple for six months.

3. The Mantras are chanted in the Kannada language in Kedarnath temple

5. The unpredictable extreme weather situation doesn’t permit somebody to reach Kedarnath easily. actually, A cloud burst is sufficient to fill the Kedarnath temple complex with water and cliff. In 2013, Kedarnath was hit by a massive flood.

9. RK Dobhal says that this temple is very strong. Its walls are covered with thick rock and its roof is made of a single stone.

10. Kedarnath temple was completely under snow for 400 years, after which this temple came to light.

11. Some religious scholars say that nothing can ever happen in this holy temple, no matter how big a calamity comes because this temple is being protected by its main deity

13. Jyotirlingas: The Kedarnath temple is one of the twelve sacred Jyotirlingas of Lord Shiva. It is also said about this temple that he blessed the Himalayas and kept him filled with devotion to Lord Shiva.

14. The Temple: This temple has faced many problems and natural disasters, despite this, this temple is still strong. Even the terrible floods in 2013 destroyed everything but could not even touch the temple.

15. Name derivation: The name Kedarnath is derived from the word ‘Kodaram’.Legend says that once the gods worshiped Lord Shiva to save themselves from the demon. Then Lord Shiva appeared as an ox and destroyed the demons and threw them into the Mandakini river with his horns.

16. Protection from demons: The Bhairo Nath temple is believed a protector of Kedarnathji. It is necessary to visit Bhairav Nath Temple on the opening and closing ceremony of Kedarnath Temple. It is considered that when the temple remains closed, Bhaironathji protect the Kedarnath shrine by keeping away the demons

17. Priest: The main priest of the Kedarnath temple always belongs to the Veerashaiva society from Karnataka, also known as Raval. He does not perform the puja ceremony himself, it’s all entire by his helper. However, when the deity is shifted from Kedarnath to Ukhimath, So the chief priest performs the ceremony. And Raval also comes with the lord to Ukhimath.

Other than these 17 Amazing Facts About Kedarnath. Here is the last bonus point that is very interesting.

As per Purana, the Kedarnath Temple was built by the Pandava brothers. Pandavas came here after the Kurukshetra war on the counsel of Sage Vyasa. The Pandavas wanted to meet Shiva to apologize for killing their brothers. However, Lord Shiva was in no mood to forgive Pandavas, And Lord Shiva turned into form an ox and hid among the beast in the hills. When the Pandavas tracked him then he again hides by sinking his head in the land. One of the Pandavas pulled his tail and a battle ensued. The bull’s head landed at Rudranath’s place, the body parts landed at four other places. These five places are known as Panch Kedar. This forced Lord Shiva to appear before the Pandavas and pardon them. Thus Lord Shiva changed into Jyotirlinga and established himself as Kedarnath.