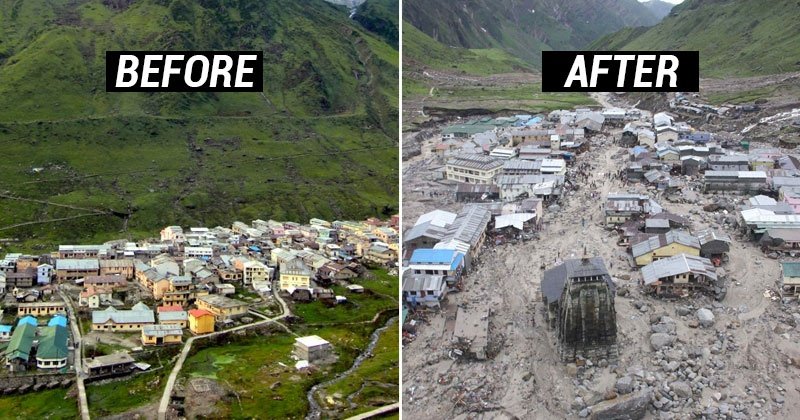 If we talk about Kedarnath Flood Story, then what comes in mind first is disaster and tragedy. Because Kedarnath town in Uttarakhand was the most affected area during the 2013 flash floods in North India.

The Kedarnath Temple complex, surrounding areas, and Kedarnath town suffered vast damage. But the temple structure did not suffer any “major” damage.

Apart from a few cracks on one side of the four walls which was caused by the flowing debris from the higher mountains.

During the disaster a huge rock among the flood, mud, debris worked as a barrier. And it protected the temple from the extensive damage.

The surroundings of the Kedarnath Temple for example – buildings, hotels, and market areas were vanished away in the flood and damaged heavily.

“One of the reasons which were given by the priests was Lifting of Dhaari Devi Temple”. Even local people believed in this side of the story.

The priests believe that any god which was established in Kedarnath is considered to be in purest of its form. And it should not be displaced.

But the govt destroyed the forests and shifted the place of sacred Dhaari Devi Temple.

Dhari Devi was supposed to control nature’s anger. This step was opposed by the priests and localities. But the authorities ultimately shifted the place of Dhari Devi Temple and constructed a dam on its site.

In the month of June 2013, the region suffered its worst disaster in its living memory with widespread destruction. Coincidently, the disaster took place during the peak season of tourism and pilgrimage in the Chota Char Dham Yatra. Hence, increasing the number of victims with an unfavorable impact on the immediate rescue and relief operations.

The entire region of the state was hit by ‘heavy’ to ‘very heavy’ rainfall. Resulting in flash floods and landslides over a wide area.

Uttarakhand and nearby areas experienced heavy rainfall. According to data, it was about 375 percent more than the benchmark rainfall during a normal monsoon.

Unnecessary overcrowding in the name of tourism and devotion was just adding pressure to the Kedarnath.

The disastrous Kedarnath Flood wreaked great havoc in the Kedarnath Valley and the other parts of Uttarakhand.

The flash flood was triggered by heavy rain and cloudburst on the massive glacial lake. However, the Kedarnath Temple that is built on the bank of Mandakini and the mythological Saraswati river was not damaged.

Tremendous cloudbursts were the prime reason for this Kedarnath Flood Tragedy. Due to its proximity to the surroundings of Chorabari Glacier, the area around the Kedarnath Temple suffered unspeakable damage.

Overflow of the Mandakini River

One reason is the Overflow of the Mandakini river. And because of this flash flood destroyed the area of Kedarnath on 16th and 17th June 2013 respectively.

As per the sources, Kedarnath is an area of difficult weather conditions. And so the western disturbance from the Caspian Sea and the Black Sea. It carried moisture in the air while passing the Arabian Sea.

And there was also cyclonic storm which was originated over the Bay of Bengal. And it went till the Kedarnath and surprisingly these lead to cloud formation.

Because of these two clouds, one from the Caspian Sea and the second from the Bay of Bengal attacked each other which led to massive cloudbursts.

There was also another reason behind the massive cloudburst. Kedarnath temple is built inside a massive gorge. And so on cloud got collected which ultimately became a reason for continue heavy rainfall and lead to a massive landslide.

This landslide occurred due to the overflow of the river Mandakini and Saraswati. Then the river took a disastrous form mixed with mud, bricks, and debris (dead bodies and waste) which was coming from the landslide. And this debris destroyed everything which came in between the way from Rambara to Gaurikund.

Debris created a barrier between the union of Mandakini and Saraswati which eventually diverted the route of Saraswati.

Kedarnath Flood Story is based on the real tragedy of Kedarnath valley that happened on the date of 16th and 17th June 2013.

The incident started on the date of 16th of June 2013, at 5:15 pm. When the heavy rain flooded the Saraswati River and Dudh Ganga catchment area.

Resulting in excessive flow and heavy soil erosion and landslide. The floodwater along with the gathered debris moved towards the Kedarnath town.

It washed off the upper part of the city (Sankaracharya Samadi, Jalnigam guest house, Bharat Seva Sang Ashram, etc). And leading to the biggest ever disaster witnessed in the region.

Due to heavy downpour, the town of Rambara has completely vanished on the evening of 16th June.

On the 17th June 2013, there was no sign of relief for victims who got stuck in the Kedarnath tragedy.

On the 17th of June, another disaster struck at 6:45 am. It was caused by the overflow and collapse of Chorabari Lake.

But at around 7:15 in the morning, the Kedarnath temple got hit by the second round of flood which came as the flash flood.

And it released a large volume of water which caused another flood in the Kedarnath town. It led to heavy devastation downstream.

The gush of water was running down from Kedarnath and Rambara areas. And it brought giant sediment load consisting of a huge rock boulder.

The heavy sediment load along with giant boulders acted as weapons of destruction. And it vanished away everything that came in between their way.

The overflow of Chorabari Lake

When we talk about Kedarnath flood story and reason, then one of the major reasons for the flash flood was a glacier lake. This glacier lake is Chorabari Lake which is also known as a “Killer Lake”.

Chorabari lake had water sources from the melting glaciers and heavy rainfall in the morning the dam closure of Chorabari lake burst.

The flood which came down from Chorabari lake was about 300m in height and moving at a speed of 40km/h.

Flash flood was there for less than 5 minutes according to the localities there. Everything got destroyed and destructed within minutes except the main Kedarnath temple.

The districts of Bageshwar, Chamoli, Pithoragarh, Rudraprayag, and Uttarkashi were the worst affected areas. A large population of several areas was cut off across the state. And they suffered a lot due to the shortage of essential commodities.

How many died in Kedarnath Flood?

This horrific incident was the part of the 2013 North India Flood. It affected 4550 Villages and caused more than 5748 deaths. This is the government data, so the real death count could be more than 10,000 deaths.

The extensive volume of water-induced erosion along all the river valley which turn triggered landslides at a number of places. It is worth noting though that despite the damage caused and the fear instilled by the floods.

The faith of the pilgrims was restored when they realized that though most parts of the Kedarnath town had undergone a deviation. What remained untouched was the Shiva temple built in the 8th century AD. A huge rock got stuck behind the Kedarnath Temple and protected it from the damage of the flood.

In this whole Kedarnath Flood Story, the most surprising incident is about Bhimshila Stone. During the flash flood, a huge boulder (rock) fell from the mountain and stood itself between the floods behind the main temple.

And this giant stone (now called Bhimshila) proved to be the savior of the Kedarnath Temple. And it blocked water to come inside and diverted the route of the flash flood.

The water flowed on both sides of the temple destroyed everything that came in their path. Even eyewitness observed that one large rock got stuck to the backside of Kedarnath Temple. Thus causing obstruction to the debris, and that boulder diverted the flow of river and debris. That’s how Temple avoided any damage.

The holy temple itself did not suffer any major damage. And only minor damage can be seen. It can only be called a miraculous act that a huge rock got stuck behind the temple. And it protected the temple from the destructive floods. This stone is now known as Bhim Shila.

People believe that God has saved them which seems very true. And as nobody knows where it came from and how every boulder swept away except this great big boulder.

The temple unbelievably withstood the calamity, suffering only a small crack in one of its four walls.

It stood like an enormous wall and eventually saved the lives of people who were inside the temple. But sadly couldn’t save the lives of a thousand other pilgrims who were outside the temple at the time of this gigantic disaster. And the entire valley suffered a huge loss of life and property.

Kedarnath temple is made in such a way that it acts as a damage proof device as its architecture is very well maintained. During the flash flood, Kedarnath Temple stood strong like a giant mountain.

What Experts Say About Kedarnath Flood 2013?

Despite the fact that heavy rainfall and cloudburst are major reasons for the floods and landslides. But the environmentalists believe that the flash flood of 2013 in Uttarakhand was a man-made one.

“Unplanned and haphazard construction, mismanaged tourism and intensive mining in this fragile ecosystem are some of the major reasons that made to name this natural disaster partly as man-made that increased the intensity and magnitude of flood and its damages,” writes Kala.

Disasters Effect on Tourism in Uttarakhand

Uttarakhand is the most disaster-prone state of India. The State has been suffering from disasters repeatedly with a noticeable impact on the tourism industry.

The tourism industry is one of the important sources of income, prosperity, socio-economic upliftment for the Himalayan states in India. Kedarnath shivered by the event, and tourism declined in the area after the flood tragedy 2013.

Over the years the number of pilgrims visiting the area had also rapidly increased.

In order to meet with the increasing demands of religious tourism. The Uttarakhand government built an intricate network of roads, hotels, lodges and carried out other construction activities.

However, it is also true that the unexpected timing of the rainfall and the unusual amount of it also did not leave enough time for the pilgrims to moveout.

Although the temple withstood the intensity of the floods, the complex and surrounding area were destroyed. Resulting in the death of hundreds of pilgrims and locals.

Shops and hotels in Kedarnath were brutally destroyed and all roads were broken.

After that, Chief Minister of Uttarakhand announced that the Kedarnath shrine would remain closed for a year to clear the debris.

The relief work was done by a combined team of Army, Airforce, Navy. Other than this, ITBP, BSF, NDRF, and PWD were on duty as Within five days. The army had deployed about 10,000 soldiers. And the Airforce had brought in more than 45 pieces of aircraft to carry out the rescue operation.

The ITBP which guards the Indo-China border swung into action even before the army or the Air force could reach the spot. They managed to rescue more than 33,000 people from remote, inaccessible mountain zones.

After the disaster, the rescue operation in the region in itself had become a risky affair due to the unpredictable weather conditions. Mountainous topography and lack of accessibility in the majority of the routes were very challenging for the rescuers. After the disaster, the fear among pilgrims resulted in a fall of number in tourism. And Tourism is a major source of economy for most of the locals in Uttarakhand.

The Nanda Devi Raj Jaat Yatra is one of the most important festivals in Uttarakhand. It takes place every 12 years was scheduled to take place on August 29, 2013. However, the state government was forced to cancel it on account of the damage caused to roads and bridges.

Facts About Kedarnath: 17 Thing That Will Blow Your Mind 😲