Yamunotri is one of the famous Hindu temples located in the Uttarakashi district of Uttarakhand. Yamunotri Temple is located at a height of 3,323 meters above sea level. Today we have shared 17 facts about Yamunotri temple that will amaze you for sure.

The Yamuna is surrounded by mountains on all sides and lies in close proximity to the China border. Yamunotri, the origin of the River Yamuna and seat of the goddess Yamuna, is one of the four sites in the Chota Char Dham pilgrimage circuit.

The chief attraction at Yamunotri is the temple devoted to the Goddess Yamuna and the holy thermal springs at Janki Chatti.

Yamunotri, the origin of the River Yamuna and seat of the goddess Yamuna, is one of the four sites in the Uttarakhand Char Dham pilgrimage circuit. It is also known as “Chota Char Dham Yatra of Uttarakhand”.

Yamunotri Glacier is believed to be the place of origin of Goddess River Yamuna at a height of 6,387 meters (20,955 ft), near the Banderpunch peaks in the Lower Himalayas, and is dedicated to goddess Yamuna.

3. In the Lap of Himalayas

Yamunotri is surrounded by beautiful mountains on all sides and lies in close proximity to the Indo-China border. It is known for offering peace and tranquillity to its visitors.

Like other “Chota Char Dham of Uttarakhand,” Yamunotri remains close for 6 months in the winter season and opens for 6 months only in the Summer season.

The reason for closing in the winter season is heavy snowfall in the Himalayan region which makes weather conditions extremely cold and also the whole area is covered by a thick layer of snow.

According to mythological beliefs, there was once the ashram of Asit Rishi. He used to visit the Yamuna regularly till the origin of Yamuna.

When he became incapacitated in old age, it became impossible for him to reach the source of Yamuna. Impressed by the faith of Asit Rishi towards himself, Yamuna changed its flow and started flowing near his ashram.

Pleased with the grace of Yamuna, the sage built his temple there and started worshiping Goddess Yamuna. That holy place was called Yamunotri and became the main pilgrimage of Goddess Yamuna.

Later that day was celebrated as the festival of “Bhai Dooj”

7. Daughter of Sun – Facts About Yamunotri

According to mythological literature, Kashyap and Aditi’s son Surya, who was married to Sangya, daughter of Vishwakarma.

From the Sangya, he got 3 children, Manu, Yam (Yamraj), Yami (Yamuna). That’s why the Yamuna is a daughter of the Sun in Hinduism.

If you entered inside the temple of Yamunotri then the prominent deity is certainly Goddess Yamuna.

Apart from Goddess Yamuna, there are many other deities also. The idols of Goddess Ganga and Saswati are revered in the temple pride.

It is known from the historical observation that the first temple of Yamunotri was built by Maharaja Sudarsan Shah (1815-1859) in 1850, which was made of wood at that time. The idol of Goddess Yamuna was installed in this temple by him.

Earlier this pilgrimage place had only a few idols placed on the altar. In later years, the new construction of the temple was done by Maharaja Pratapshah (1871-1896) which was built with stones.

10. Bandarpunch Mountain – Watershed for the Yamuna 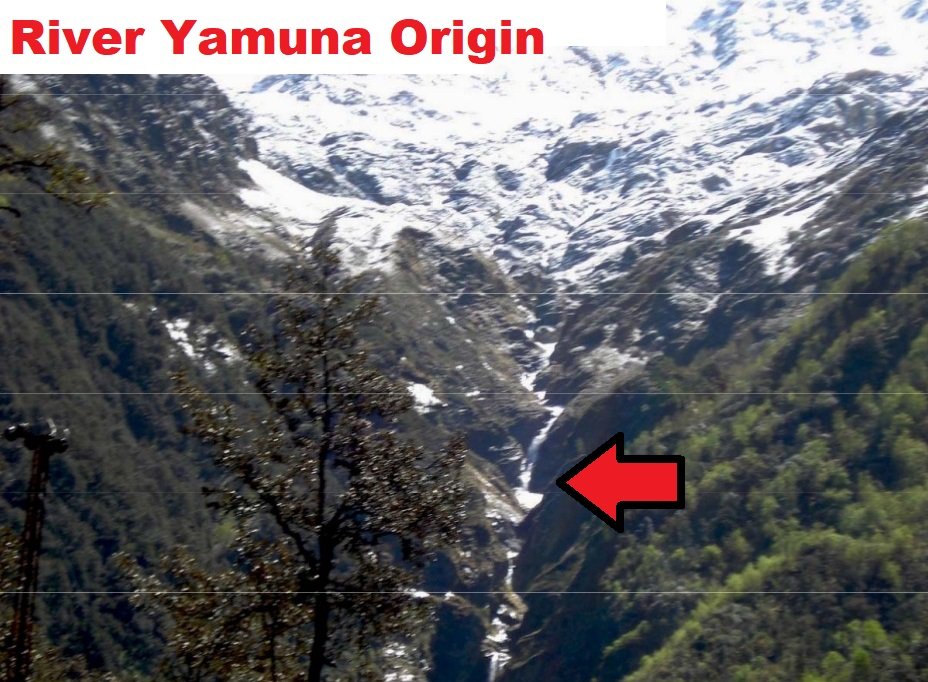 Bandarpunch Mountain is a major watershed for the headwaters of the Yamuna River, whose source lies above Yamunotri, on the west end of the massif below White Peak.

Bandarpunch mountain range has 3 peaks. To the west above Yamunotri is White Peak (6102 m), Bandarpoonch Peak (6316 m) in the east, and Kalanag (6387 m) at northeast, also known as Black Peak.

The sacred Yamunotri Temple is nearby the source of the river Yamuna, perched atop a flank of Bandarpunch Mountain (Bandar Poonch Parvat).

11. One of the most Sacred Rivers of India

Kharsali village situated at a distance of just 2 km from Janki Chatti in Yamunotri Road is a must-visit place. Most of the travelers are deprived of seeing this wonderful place due to a lack of information.

There is a legend about Lord Hanuman visited this place. There are idols of Lord Rama, Lord Krishna, Goddess Yamuna, and Lord Hanuman are situated in the cave temple.

The priests of Yamunotri are householders Brahmin of the Uniyal caste.

According to historian Shiv Prasad Naithani, around 1855, Garhwal King Sudarshan Shah re-built a small temple at Yamunotri. At that time the ancestors of these priests, Maluram Poluram, were entrusted with the task of worshipping this temple.

Earlier the idol remains in the cave before the formation of the temple.

In ancient times, the “Western Bhaahu Mountain” has been called “Kalindi Parvat”, due to which the name of Yamuna is also famous as “Kalindi”.

Lastly, in the list of Facts about Yamunotri, we have one more bonus point you must know and it is Janki-Chatti.

Janki Chatti is a basecamp for the trek to Yamunotri temple. It is located at a height of 2,650 meters above sea level. Janki Chatti is also famous for its hot water springs and beautiful waterfalls and it makes it an inevitable part of the Yamunotri pilgrimage.